THE FUTURE IS FEMALE by That New Dress 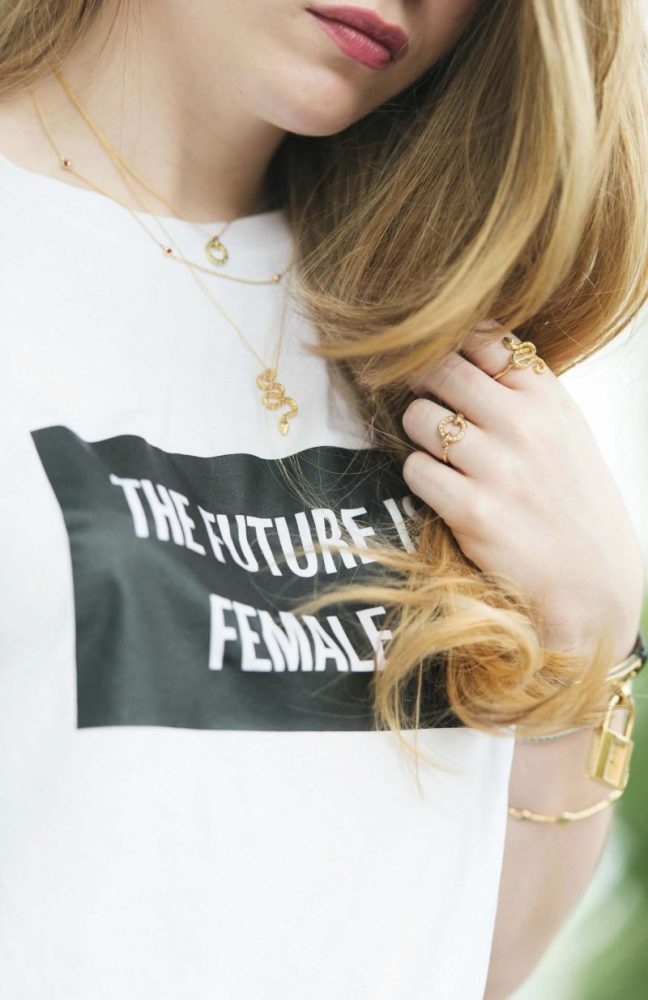 I’ve wanted to write this post for a while, as this is a theme which has been playing on my mind a lot of late. Firstly, it’s something which has become more and more apparent the older I’ve got. Secondly, it never ceases to amaze me what can be achieved when we pull together and support each other. In addition to this, there’s a fashion trend developing which underpins this message and I think it’s a movement we should all be part of.

I want to talk about the female empowerment and the strength of being a woman. There is no doubt women still face adversity, whether it be in the workplace, out on the street or in the daily choices we have to make. The inexcusable gender pay gap is just one example of how being a woman isn’t easy, but let’s be the generation that makes that change.

Working in a predominantly female industry means I see first-hand the best and worst parts of us. Hands down, the best bloggers are the ones that support each other. I’ve come across a few who’ve resorted to underhand tactics to get ahead and let me tell you, it’s never gone unnoticed and it’s never been forgotten. However, rather than focus on the negative, I thought I’d highlight a few women who are leading by example and showing us all how it should be done.London Road Jewellery

London Road Jewellery is a London based, family run jewellery brand. It’s a brand that has resonated with me for a number of reasons which you can read about HERE and HERE. Today I wanted to talk about its Creative Director, Suzanne, who in conjunction with her brother has taken over the reins of this family business.

Suzanne is a triple threat. She raised a family, runs a successful business and is constantly striving forward. She’s the perfect example of being able to do it all.

Aside from overseeing the daily running’s of the business, Suzanne is responsible for designing each collection. This means she has to be ahead of the trends, forward thinking and incredibly creative.

Jewellery designed for women by women, should always be the obvious choice. The other thing I’m a strong believer in is, when it comes to fine jewellery, why wait for a man to buy it for you?! Treat yourself instead, as nothing speaks volumes more than a woman who gets what she wants, when she wants it by her own means.

Coloured stones and diamonds are something London Road is recognised for and it’s no surprised Suzanne caught onto the red, green and gold trend early on. Red is a colour you would never have seen in my wardrobe 18 months ago, but now I can’t get enought of it. The Ruby Raindrop necklace, which I’ve layered with the Gold Kew Serpent Pendant and the Tsavorite Meridian Circle Pendant, is a personal favourite of mine. It’s not only timeless but also still manages to be right on trend. Talk about the best of both worlds!

I use to live in LA where I was subjected to “film talk” on a daily basis. One of the themes which constantly came up when I spoke to female writers, directors and producers was the lack of strong female leads in big budget films. I particularly remember being at a panel discussion where Jurassic World was being heavily debated. They were questioning why the female character needed to be so highly strung and the need for her to be running around in heels and a tight skirt. They argued it’s these sorts of characters that play into negative gender stereotypes.

Therefore, I can only imagine their delight at the arrival of Wonder Woman, a blockbuster which finally puts a strong and modern female character as its lead. Also, given the astronomical box office takings, it suggests it’s not only women in Hollywood who are craving these sorts of characters.

Maria Grazia Chiuri is a woman I’ve spoken about before on the blog (catch it HERE if you missed it). She is the first female Creative Director of Christian Dior and is currently taking the fashion world by storm.

Her first collection put feminism and female empowerment at its heart and she has single-handedly bought about a revolution in fashion. Next season expect to see a lot of tees on the high street with strong female messages, such as the one I’m wearing from Peacocks’ A/W17 collection.

I want to see more women like Suzanne running businesses and demonstrating first-hand the strength of the next female generation.
I want to see more blockbuster films, like Wonder Woman, where strong female characters are given central roles.
I want to see brands from the luxury end right through to the high street putting female empowerment at the heart of their designs.
I want to see women continually supporting each other in business so we can all reach our full potential.

Thank you to London Road Jewellery for sponsoring this post. All thoughts, opinions and feminist stance remains my own!